Hundreds of thousands of employment disputes occur every year in Ukraine. Most of these disputes are about people’s most valuable human capital – their ability to work, earn stable income and guarantee the future for themselves and their families. Fair and secure employment relationships are the backbone of inclusive societies and prospering economies.

The human face of employment disputes

Vasiliy is 34 years old marketing specialist working for a young and ambitious Ukrainian company. His main responsibility is to promote one of companies major brands. Vasiliy works hard and achieves results. To do so he regularly skips vacation days and weekends.

His managers, however, had different ideas. Vasiliy received a termination note which stated that his position has been eliminated. He complained to HR and the notice had been withdrawn. Soon after that Vasiliy received another termination note that he did not meet the position’s requirements. He countered that he has never been evaluated so there is no ground for termination. Finally, the company found a way to get out of the employment contract and lay Vasiliy off. As a sort of retaliation for all the troubles the employer denied to pay any compensation – neither for the termination, nor for the many vacation days that Vasiliy forewent during his employment. Vasiliy checked the options for resolving the disagreement in a fair manner. There are not a lot of choices and at the end after difficult deliberations he decided to do nothing, shoulder the damages and just look for a new job.

Questions about the state of employment justice in Ukraine

Vasiliy is not alone. A recent HiiL Justice Needs and Satisfaction study shows that in Ukraine every four years there are more than 1 million serious employment disputes. Most often the people have to deal with termination of employment contracts, discrimination (mostly based on age) and non-payment of wages. After consumer disputes, employment-related disagreements are the second most frequently occurring legal problem in the everyday life in Ukraine. If employment disputes are so important at many different levels, the logical questions are: How does employment justice functions in Ukraine? Do the people receive fair solutions? Who ‘owns’ the employment justice infrastructure in Ukraine? 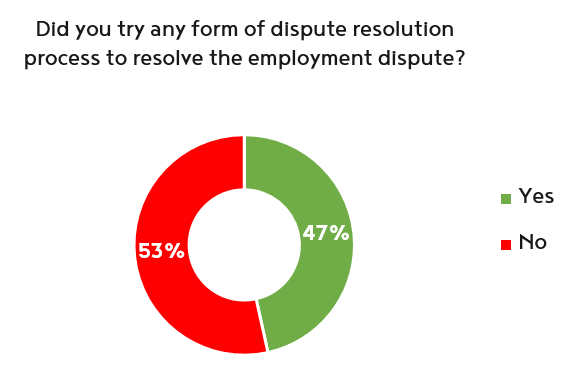 The most prevalent response strategy in the cases of employment disputes is to contact the employer – about 40% of the employees do so. But when it comes to formal dispute resolution methods the survey data shows a big gap. Less than 1% of the people who had disputes around their employment relationship brought it to court! Small proportion addressed some sort of public authority and very few used the services of a lawyer to resolve the problem.

The Ukrainian employment legal framework recognises the existence of semi-formal employment dispute resolution commissions. Such commissions are compulsory for employers who employ more than 15 individuals. The survey did not find a lot of people using these commissions. Anecdotal evidence suggests that these are seen as biased towards the employers.

In this environment it is not surprising that the employees find little justice. We measured 10 aspects of the quality of the procedure, the quality of the outcome and the costs of employment justice dispute resolution (1 is negative; 5 is positive). On most dimensions, particularly in procedural fairness, stress and negative emotions we see rather low scores. 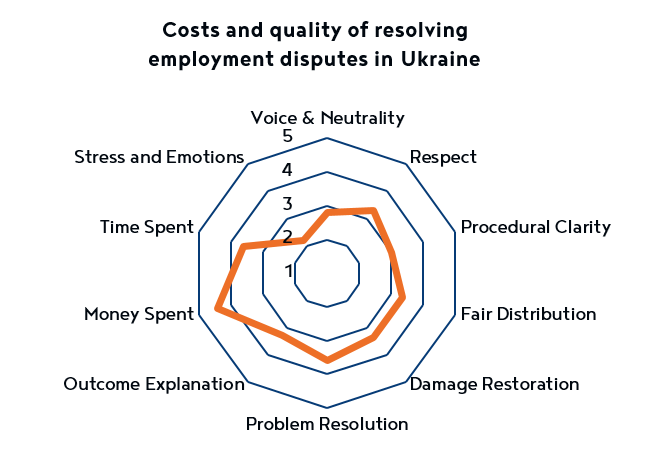 The Way Ahead: Innovation and ownership

The users of justice do not perceive the existing processes for resolving employment disputes as fair and accessible. Better procedures for resolving employment disputes are needed. Innovative procedures can provide accessible, affordable and fair solutions at a large scale. At HiiL we believe that these new procedures will come from the ever-growing community of Ukrainian justice innovators. Start-ups, civil-society organisations, lawyers, judges and public officials are capable of great innovations.

But employment justice also needs ownership – institution or coalition of institutions who have at the core of their mission the establishment and maintenance of a well-functioning system for employment justice in Ukraine. A system which delivers accessible, affordable, effective and quick justice to employers and employees.

Now the challenge is to discover and stimulate bold innovations in the field of employment justice and at the same time to vest ownership in committed and capable stakeholders!