Almost four thousand randomly selected individuals from across the Emirates were interviewed about their needs for just and fair processes and resolutions. People were asked whether they faced problems, which could have been resolved with legal means. We also asked locals and expats about their responses to the legal challenges. Where do they look for legal information and advice? Which justice journeys do they travel in order to receive fair resolutions? What are their perceptions of the quality of the dispute resolution procedures? How they see the outcomes of such processes? 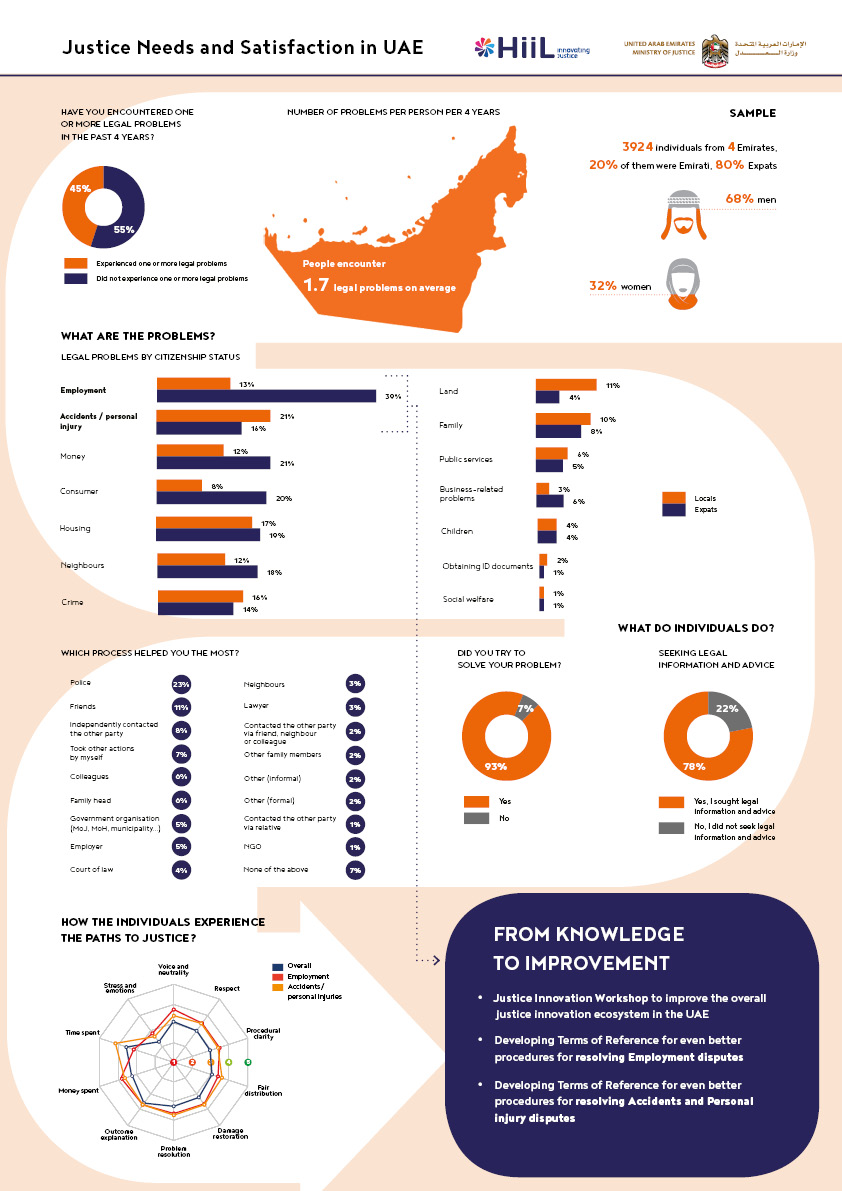 Eighty percent of the respondents were expats and 32% were women. The study shows that almost half of the people living in the UAE – 45%, have had to deal with one or more legal problems in a period of 4 years. Examples of such problems are employment disputes, land conflicts, money related disagreements, family disputes as well as various other situations which might occur in daily life.

These findings are typical based on what we see in other developed and industrialized countries. In a study HiiL conducted in the Netherlands in 2015 for example, we found that 46% of Dutch residents encountered at least one legal problem over a four-year period. Another study from Canada in 2009 reported that 45% of Canadians experience one or more legal problems over a similar period.

Which are the most frequently occurring legal problems for UAE residents?

Locals report most often accidents and personal injuries whereas expats experience most frequently employment problems. Other often-occurring legal problems are disputes around money, conflicts between neighbors, problems with housing and various types of challenges. Land and family related legal problems occur less frequently, and yet have significant impact on the lives of the people involved. The multitude of legal challenges identified is a clear confirmation that the people of the UAE seek accessible and effective justice journeys. Effective justice procedures are one sure-way to guarantee that people develop to their full potential in an environment of fairness and rule of law.

Promisingly, most of the people in the UAE who experience legal challenges take active steps towards resolution. An impressive 93% say that they took actions to obtain a fair resolution. This indicates an active and empowered population, which is willing to pursue paths to justice. The finding also shows the tremendous potential in the UAE on which justice innovations can thrive. It is important to note that UAE residents are supported by a vibrant infrastructure for provision of legal information and legal advice. 78% of respondents say that they received some sort of information and advice to navigate the justice journeys.

The report indicates that the quality of the justice processes, the quality of the outcomes and the costs of justice can be further improved. Namely, the psychological dimension to justice journeys, such as stress and emotions, can be considerably redesigned and developed. Another dimension which can be improved is the quality of the process – objectivity and neutrality will increase people’s satisfaction with justice.

The Ministry of Justice in the UAE is determined to flow This data into action and improvements. It will help move towards Vision 2021’s goal to make the UAE’s justice system one of the most effective in the world. Data and knowledge will contribute to improved delivery of justice services according to people’s needs and expectations.

In partnership, MOJ and HiiL are working on two strategic initiatives. They are organizing two projects to innovate the justice journeys for employment disputes and accidents. More in-depth data will be collected to better understand the specifics of these two legal problems. Two Innovative workshops with stakeholders and service providers will take place in order to set Justice Delivery Targets based on the data from the study. The envisioned end-results are prototypes for innovate justice procedures that deliver better justice to the people of the UAE.

Second, the MOJ is working together closely with HiiL experts to improve the overall justice innovation ecosystem in the UAE. The goal of this part of the project is to make sure that there will be more and better innovations in the justice sector developed in the UAE in the years to come. Efforts are made to integrate international justice innovation best practices and align them with UAE values and existing local practices.

Simultaneously, the Ministry of Justice and Hiil are holding Justice Innovation workshops with the relevant stakeholders from the justice sector, the business, technology and education communities to develop an Innovation Plan for Justice in the UAE. This will be translated into a more inclusive society, and ultimately into more happiness and will contribute to the realization of the UAE innovation Strategy.