Syria. The scale of displacement, destruction, violence, and victimhood is unprecedented by all standards.

The UN refugee organisation UNHCR tells us that 6.5 million people are internally displaced and that there are over 5 million people who have fled Syria to other countries. The Syrian Observatory for Human Rights reported in March this year that the war had killed 465.000 people; current estimates are at over half a million. Statistics from UN Habitat say that 760.000 housing units have been destroyed, that 50% of the hospitals don’t function; the numbers are probably much higher.

I have talked to credible journalists that speak of neighbourhoods that have been emptied, after which other groups of people are brought in. Credible organisations have confirmed that chemical weapons have been used repeatedly. As things look now, the Assad government is likely to win the war. He may ultimately be sacrificed, but his power structure is likely to survive. Russia, Iran, Turkey are in the political lead – and have been for a while. The US, the EU, and the UN are largely absent. It increasingly looks like this will be the first major war in quite a while in which the powers that ‘win’ are not known for their default position in favour of rule of law and human rights.

What is the rule of law and human rights world doing? Focussing on accountability. There are digital pieces of evidence of every single hour that this war has lasted. Gradually (and with limited coordination, it seems), an accountability machine has been set up. In 2011 the UN Human Rights Council set up the Independent International Commission of Inquiry to investigate alleged violations of international human rights law since March 2011 and to identify those accountable. In the meantime a number of NGOs staffed by highly professional investigators, funded by many of the same states that pushed for the Independent Commission, are also collecting evidence; for example the Commission for International Justice and the Syrian Justice and Accountability Centre. In 2015, the Security Council set up the Joint Investigative Mechanism to investigate the use of chemical weapons (this week, the Russians vetoed the extension of its mandate). As icing on the cake: last year the UN General Assembly set up the International Impartial and Independent Mechanism to Assist in the Investigation and Prosecution of Persons Responsible for the Most Serious Crimes under International Law Committed in the Syrian Arab Republic since March 2011, also known as IIIM (or ‘Triple IM’). 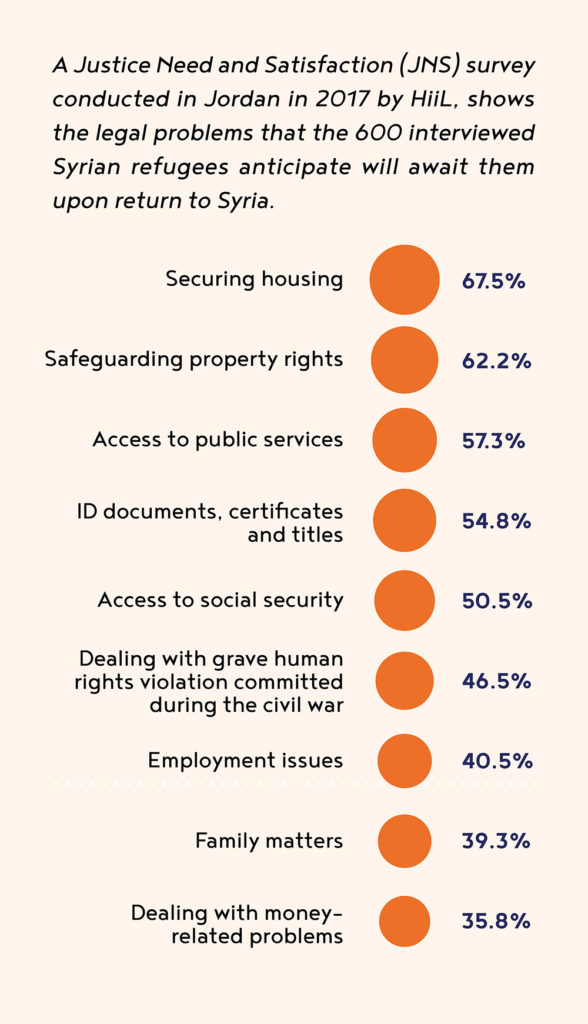 The main ‘justice’ question connected with peacebuilding has always been justice or peace? Put differently: how can we talk peace with a leader that we threaten to put behind bars? Our data suggests that there is another justice question that the international community must look at: how does the question of accountability relate to the immediate need for mundane justice? In Syria, considerable resources are being put into the first. Nothing is happening in the second area. The UN system has developed a considerable body of knowledge about accountability. Little or no knowledge is available on rebuilding justice mechanisms so that people can move back into their homes, live on their land, sort out inheritances, deal with child custody matters, get back to work, and (re)start an SME. These are also critical justice needs for people who want to pick up their lives after conflict. It might even be that not focussing on mundane justice undermines accountability efforts. What is the relationship between the two types of justice and when must one focus on which one? Mundane justice may also be a space in which those that strongly prioritize rule of law and human rights world and those that consider that less of an immediate priority in post conflict reconstruction can find common ground, without compromising principles. This question might be worth a few round tables and more research. It seems important.

This website uses cookies to improve your experience while you navigate through the website. Out of these, the cookies that are categorized as necessary are stored on your browser as they are essential for the working of basic functionalities of the website. We also use third-party cookies that help us analyze and understand how you use this website. These cookies will be stored in your browser only with your consent. You also have the option to opt-out of these cookies. But opting out of some of these cookies may affect your browsing experience.
Necessary Always Enabled

Any cookies that may not be particularly necessary for the website to function and is used specifically to collect user personal data via analytics, ads, other embedded contents are termed as non-necessary cookies. It is mandatory to procure user consent prior to running these cookies on your website.